America’s infrastructure: how bad is it really?

Really bad, to put it simply…

Unfortunately, it’s no secret that America’s infrastructure is falling apart. Just look around you. You’re bound to see a road inundated with potholes. You likely run into excruciating delays due to poor road conditions on a regular basis. How about that aging bridge you drive over daily in need of some serious updates? The list of infrastructure shortcomings within America could go on and on.

From roadways to bridges, waterways, transit, dams and aviation, as a nation we have neglected to make the proper investments in transportation and it’s obvious.

What’s most unsettling is in 92 days (and counting) the Highway Trust Fund will become bankrupt. The pot of money that’s supposed to help fix America’s infrastructure will cease to exist, leaving nearly 70,000 bridges structurally deficient, endless miles of interstate in poor condition and in need of repairs, and that’s just the beginning of America’s infrastructure issues.

While it would be easy to sit back and simply point our fingers at politicians for the infrastructure inadequacies and their lack of progress with the Highway Trust Fund, that’s not going to help the situation. As American citizens and businesses, we have to be prepared to pay the price to remedy the incessantly mounting issue that is the collapse of our country’s infrastructure.

Like many (all) things, having a solid understanding of the situation is vital. And while anyone can see the more obvious issues with our infrastructure, that doesn’t mean everyone is educated about what that means for the future. The rate at which our infrastructure is deteriorating is alarming, and quite honestly so is the lack of response and education surrounding it.

According to a 2013 report from Transportation from America, by 2023, one in four US bridges will be 65 years or older. What’s alarming about this statistics is that these bridges were designed and built for a 50-year lifespan. According to the Federal Highway Administration (FHWA), more than 30% of our bridges have already surpassed their 50-year design life. I don’t think I have to spell this out for you, but I will. In the coming years, the number of bridges that need to be repaired and rehabilitated is going to cost a significant amount of money. 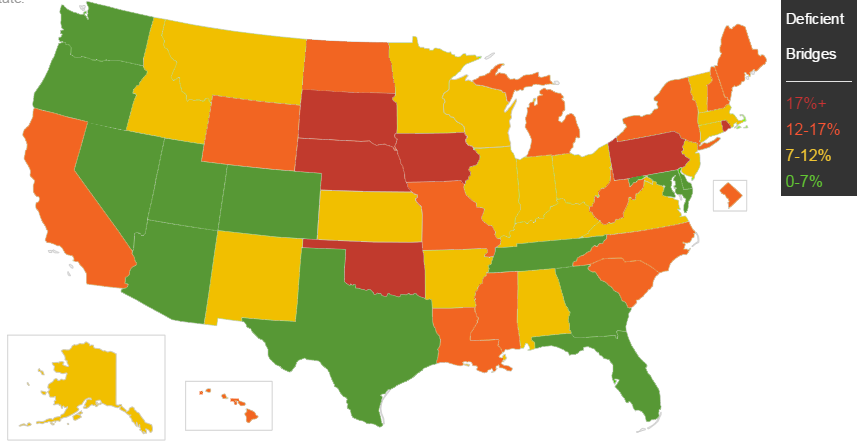 Image via Transportation for America

Money we won’t have come end of May.

And it’s not just our bridges. Our highways have gone to hell, too. Once home to the best interstate system in the world, we have neglected to make the necessary investments and now, our highways are falling apart. As time passes and we continue to neglect our roadways, the price for maintenance and repair will continue to climb – once again reminding us of the shortage we are facing in just a few months.

But how did we get here? How did it get to a point where we can literally see the bottom of the empty barrel? That, my friends, is a great question.

How did we allow this issue to be passed over year after year? Can we blame Congress and other political factors, or do we need to take on some of the blame as well? After all, how would we react to an increase in the Federal gas tax – a tax that hasn’t increased since 1993?

Would we welcome an increase and understand that it was vital to the health of our nation’s infrastructure?

I don’t know if I can answer that one way or another. What I can say is the politics that have played into the lack of action is quite disturbing. What’s even more disturbing is the absence of widespread urgency to remedy the situation we are facing. There’s no what if’s here, in 93 days, we won’t have any money in the Highway Trust Fund.

Then what? Will the Boxer-Paul “Invest in Transportation Act” make its way through legislation and be passed into law?

For now, I guess we’ll have to wait and see.

What do you think about America’s infrastructure? How can we get a handle on this out-of-control issue on our hands? Share your thoughts in the comments below.