The final determination of dumping margins in the current OCTG trade case is only days away, and the U.S. steel industry is rallying support for a change in the Department of Commerce’s methodology used to calculate preliminary margins. But South Korean imports continue to come into the United States in record numbers. In fact, the 2014 pace of these imports is exceeding the 2013 levels by over 30 percent. And so the entire market wonders, is this last surge because the South Koreans think they will receive dumping margins in a few weeks? If the South Koreans are confident they have found a way to get past the laws of fair trade, is this only the beginning? We will know the answer soon — but not soon enough, as far as I am concerned! 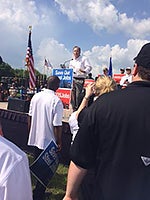 I have been pleasantly surprised by the support shown to the steel industry by a significant number of congressmen and senators. Rallies have been held in six states to raise the awareness of the OCTG trade case, and each rally was well-supported by local government officials. I participated in a rally in Fairfield, Alabama, and three members of Congress — both Democrats and Republicans — were present to show their support: Rep. Terri Sewell, Rep. Spencer Bachus and Rep. Robert Aderholt. The emphasis of these rallies is not the damage done to the OCTG producer’s profits; it is about what really matters to the economy: the creation of U.S. jobs. If we produce OCTG in the United States, that means jobs in the pipe mills, jobs in the steel mills, jobs at the support companies for these facilities, jobs in restaurants and stores in the communities surrounding the mills … and the list goes on. The jobs ring continues to expand outward as domestic OCTG production rises. 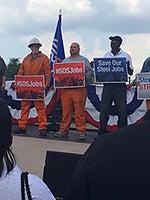 In 2009, China was found to be dumping 1.3 million tons of OCTG into the U.S. market. Now, in 2014, Korea is on pace to export approximately 1.4 million tons of OCTG into the U.S. market. How can anyone believe that South Korean producers are taking the same share of the market that China had without dumping? Chinese producers received duties upwards of 90 percent; Korea is using the same supply channel and is receiving similar unfair subsidies.
Selling prices for South Korean products are $140 to $180 per ton less than the domestic prices; this can’t just be due to efficient manufacturing! To make green tubing or casing from flat rolled only costs about $100 per ton, so even if the import producers make it 20 percent more efficient than U.S. producers (which is unlikely), this would only give them a $20 per ton advantage — and they still have to ship it across the ocean!
When you dive into the numbers, it’s clear that steel is being dumped into the United States. The question is: Where in the supply chain is the dumping transaction taking place? The Korean pipe mills sell green tube into the United States at a fair price, and then they give away the finishing or they buy steel at an artificially low price so they can sell green tube at a very low price but still show a marginal profit. They manufacture the same type of pipe as U.S. producers, so how can they grow market share 1,200 percent in four years? By illegally dumping into the U.S. market!

As we celebrate our nation’s Independence Day, we should remember that we are celebrating the many freedoms and benefits that come from living and working in this country. I don’t ever remember lighting off fireworks to celebrate a free-trade agreement with Korea. Celebrate the United States of America. Support U.S. OCTG producers!