GTM Research and the Solar Energy Industries Association® (SEIA®), Solar Market Insight: 3rd Quarter 2013 report shows that it has been a stellar year for the solar business in the United States. This quarter’s report states that in 2013 Photovoltaic (PV) installations continued to rise, increasing 41% over 2012 to reach 4,751 MW. According to SEIA, there were 52 utility PV projects completed in Q3 2013, totaling 539 MW of capacity. The majority of these projects came from California with one 32 MW project that was completed in Nevada by SunEdison. 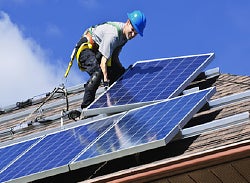 Solar was the second-largest source of new electricity generating capacity in the U.S., exceeded only by natural gas. It is the first time in over fifteen years that the U.S. installed more solar capacity than Germany, talk about the source of power!
The residential market continues to see an upswing in the U.S. solar market with PV installations up 49% year-over-year and it is anticipated further expansion up to 52% by the end of Q4. Nearly 31,000 individual residential installations were completed in the third quarter, bringing the cumulative total in the U.S. to 360,000 with California and Arizona showing the strongest in residential growth. The non-residential market continues to struggle but showed 4% growth over 2012 due to commercial, government, school and non-profit installations.

Solar Outlook for 2014
The U.S. Solar Market Insight predicts that 2014 will be about defining solutions. Solar is not bound by cost, but rather by its role in the electricity sector and as it becomes more mainstream from a technical, market and regulatory perspective will become one of the most important issues in the industry.